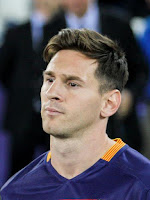 HELO ...GUYS I have a good news for messi fan. after a Argentina defect from Chile in Copa America 2016 .the captain of Argentina messi announced his retirement from international football. Now after 1 months of his retirement he  is back into his national team ,he will play the world cup qualifiers round for Argentina.On 12 August, it was confirmed that Messi had reversed his decision to retire from international football, and he was included in the squad for the national team's upcoming World Cup qualifiers.

he will play match against  Uruguay  in home soil.