on February 22, 2017
Bieber was born on March 1, 1994, in London, Ontario, at St Joseph's Hospital, and was raised in Stratford, Ontario. He is the only child of Jeremy Jack Bieber and Patricia "Pattie" Mallette. Bieber's parents were never married. Pattie raised her son with the help of her mother, Diane, and stepfather, Bruce.His mother is of French-Canadian descent; his paternal great-grandfather was of German ancestry, and his other roots are English, Scottish and Irish  He has also claimed that he has some undetermined Aboriginal Canadian ancestry.
Through Jeremy, Bieber has two younger half-siblings, Jazmyn (born 2009) and Jaxon (born 2010).Pattie worked a series of low-paying office jobs, raising Bieber as a single mother in low-income housing. Bieber has maintained contact with his father.
Bieber attended a French-language immersion elementary school in Stratford, the Jeanne Sauvé Catholic School. Growing up, he learned to play the piano, drums, guitar, and trumpet.He graduated from high school in Stratford, Ontario, the St. Michael Catholic Secondary School in 2012 with a 4.0 GPA. In early 2007, aged 12, Bieber sang Ne-Yo's "So Sick" for a local singing competition in Stratford and was placed second. Mallette posted a video of the performance on YouTube for their family and friends to see. She continued to upload videos of Bieber singing covers of various R&B songs, and Bieber's popularity on the site grew.

When searching for videos of a different singer, Scooter Braun, a former marketing executive of So So Def Recordings, clicked on one of Bieber's 2007 videos by accident.Impressed, Braun tracked down the theatre Bieber was performing in, located Bieber's school, and finally contacted Mallette, who was reluctant because of Braun's Judaism. She remembered praying, "God, I gave him to you. You could send me a Christian man, a Christian label!", and, "God, you don't want this Jewish kid to be Justin's man, do you?" However, church elders convinced her to let Bieber go with Braun. At 13, Bieber went to Atlanta, Georgia, with Braun to record demo tapes Bieber began singing for Usher one week later

Bieber in 2010, displaying his earlier haircut. 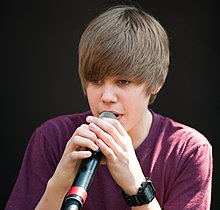 Bieber was soon signed to Raymond Braun Media Group (RBMG), a joint venture between Braun and Usher. Justin Timberlake was also reportedly in the running to sign Bieber but lost the bidding war to Usher.Usher then sought assistance in finding a label home for the artist from then manager Chris Hicks, who helped engineer an audition with his contact L.A. Reid of The Island Def Jam Music Group Reid signed Bieber to Island Records in October 2008 (resulting in a joint venture between RBMG and Island Records) and appointed Hicks as executive Vice-President of Def Jam, where he could manage Bieber's career at the label. Bieber then moved to Atlanta with his mother to pursue further work with Braun and Usher.Braun became Bieber's manager in 2008.
Bieber's first single, "One Time", was released to radio while Bieber was still recording his debut album The song reached number 12 on the Canadian Hot 100 during its first week of release in July 2009and later peaked at number 17 on the Billboard Hot 100. During fall 2009, it had success in international markets.[30] The song was certified Platinum in Canada and the US and Gold in Australia and New Zealand. His first release, an extended play entitled My World, was released on November 17, 2009. The album's second single, "One Less Lonely Girl", and two promo singles, "Love Me" and "Favorite Girl", were released exclusively on the iTunes Store and charted within the top 40 of the Billboard Hot 100.