on February 20, 2017
Pokhara (Nepali: पोखरा) is a metropolitan and the second largest city of Nepal. It is the headquarter of Gandaki Zone and Kaski District. It is located 200 kilometres (120 miles) west of the capital Kathmandu. Despite being a comparatively smaller valley than Kathmandu, its geography varies dramatically within just few kilometres from north to south. The altitude varies from 827 metres (2,713 feet) in the southern part to 1,740 metres (5,710 feet) in the north.Additionally, the Annapurna Range with three out of the ten highest mountains in the world — Dhaulagiri, Annapurna I and Manaslu — are within approximately 15 – 35 miles of the valley.Due to its proximity to the Annapurna mountain range, the city is also a base for trekkers undertaking the Annapurna Circuit through the ACAP region of the Annapurna ranges in the Himalayas. 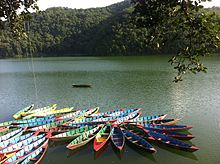