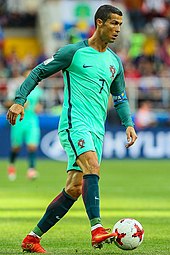 Following the Euro 2016 success, Ronaldo scored four goals against Andorra in the 2018 FIFA World Cup qualifiers on 8 October 2016. His four goals against a nine-man team marked the highest amount of goals he has scored in an international match. On 13 November, Ronaldo scored two goals (while also missing a penalty) in another qualifier against Latvia, which ended in a 4–1 home victory; these goals brought his international tally to 68 goals, putting level with Gerd Müller and Robbie Keane as the fourth-highest European international goalscorer of all-time. He played his first professional match on his home island of Madeira on 28 March 2017 at the age of 32, opening a 2–3 friendly defeat to Sweden at the Estádio dos Barreiros; with the goal, he tied with Miroslav Klose on 71 goals as the third-highest scoring European in international football.

"I admire him [Ronaldo], if I had to set up a national team he would be my first pick."
—Pelé, in an interview with Sportsmail.
In Portugal's opening match of the 2017 FIFA Confederations Cup against Mexico on 17 June, Cristiano Ronaldo set-up Quaresma's opening goal in an eventual 2–2 draw.Three days later, he scored in a 1–0 win over hosts Russia. On 24 June, he scored from a penalty in a 4–0 win over New Zealand, which enabled Portugal to top their group and advance to the semi-finals of the competition; with his 75th international goal, Cristiano Ronaldo also equalled Sándor Kocsis as the second-highest European international goalscorer of all time, behind only Ferenc Puskás He was named man of the match in all three of Portugal's group matches. Ronaldo left the competition early. After Chile defeated Portugal 3–0 on penalties in the semi-finals, he was allowed to return home to be with his newborn children. Therefore, he missed Portugal's third-place play-off match in which Portugal defeated Mexico 2–1 after extra time.