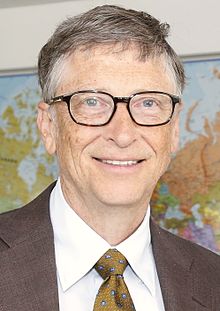 William Henry "Bill" Gates III (born October 28, 1955) is an American business magnate, investor, author and philanthropist. In 1975, Gates and Paul Allen co-founded Microsoft, which became the world's largest PC software company. During his career at Microsoft, Gates held the positions of chairman, CEO and chief software architect, and was the largest individual shareholder until May 2014. Gates has authored and co-authored several books.
Starting in 1987, Gates was included in the Forbes list of the world's wealthiest people and was the wealthiest from 1995 to 2007, again in 2009, and has been since 2014. Between 2009 and 2014, his wealth doubled from US$40 billion to more than US$82 billion.Between 2013 and 2014, his wealth increased by US$15 billion. Gates is currently the wealthiest person in the world with a net worth of US$90 billion as of August 2011
Gates is one of the best-known entrepreneurs of the personal computer revolution. Gates has been criticized for his business tactics, which have been considered anti-competitive, an opinion that has in some cases been upheld by numerous court rulings. Later in his career Gates pursued a number of philanthropic endeavors, donating large amounts of money to various charitable organizations and scientific research programs through the Bill & Melinda Gates Foundation, established in 2000.