on September 19, 2016
London: Paul Scholes criticised Manchester United's "sloppy" display after their 3-1 loss away to Watford on Sunday.
Goals from Etienne Capoue, Juan Zuniga and Troy Deeney, with a late penalty, saw the Hornets to a comfortable win at Vicarage Road as United, whose lone goal came from teenage striker Marcus Rashford, suffered a third straight defeat under manager Jose Mourinho.
Former United midfielder Scholes, now a television analyst with BT Sport, didn't spare his old side.
"The quality on the ball was as poor as you've seen from a Man United team, and that's just the way it is at the minute," Scholes said. "You're not sure what you're going to get.
"Rashford is probably the only shining light really and he didn't have his best game today, but he looked a threat. I just think in possession Man United were really, really poor.
"Individually it wasn't good enough. In possession it wasn't good enough. So sloppy, giving the ball away all the time."
Scholes, who retired from football for a second time in 2013, spent his entire career at United, mostly in central midfield.
But it is in this area of the field that Scholes believes United have their greatest problems, saying his former team-mate Michael Carrick, an unused substitute against Watford, ought to start.
Scholes also suggested Marouane Fellaini was not the right player to sit alongside Paul Pogba in midfield.
"I thought Fellaini was all right, he does a job which stops the other team. But I think if you're Manchester United you need more than that," Scholes told BT Sport.
"I think you need someone who can stop the play -- but he needs to be capable of controlling the game of football as well, playing forward, passing forward.
"As well as he (Fellaini) has done in the first three or four games, I just can't understand why Michael Carrick's here."
He added: "It looked last year like he was leaving, he's not been involved a minute of the season, so what he's done I don't know.
"Obviously (Bastian) Schweinsteiger -- he (Mourinho) is not keen on him. They need to get a playmaker in there. You're coming to Watford, you're not going to Arsenal."
Scholes was concerned by how often Watford opened up United's defence, adding: "I expected them to be a lot tighter defensively, especially with bringing Chris Smalling in, but they were all over the place and every time a ball came into the box you felt Watford were going to score.
"Something's not right there. The cohesion of the team isn't there. He (Mourinho) needs to find the
right mix of players." 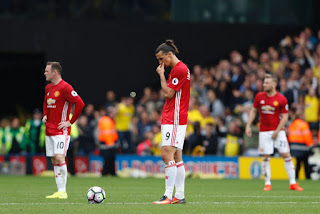