on May 19, 2017
Chelsea Football Club is an English professional football club based in Fulham, London, that competes in the Premier League, of which they are reigning champions. Founded in 1905, the club's home ground since then has been Stamford Bridge
Chelsea had their first major success in 1955, when they won the league championship. They then won various cup competitions between 1965 and 1971. The club's greatest period of success has come during the last two decades; winning 18 major trophies since 1997. Chelsea have won six national league titles seven FA Cups, five League Cups and four FA Community Shields, one UEFA Champions League , two UEFA Cup Winners' Cups, one UEFA Europa League and one UEFA Super Cup. Chelsea are the only London club to win the UEFA Champions League,[6] and one of four clubs, and the only British club, to have won all three main UEFA club competitions.[7][8]
Chelsea's regular kit colours are royal blue shirts and shorts with white socks. The club's crest has been changed several times in attempts to re-brand the club and modernise its image. The current crest, featuring a ceremonial lion rampant regardant holding a staff, is a modification of the one introduced in the early 1950s.[9] The club have the sixth-highest average all-time attendance in English football.[10] Their average home gate for the 2015–16 season was 41,500, the seventh highest in the Premier League.[11] Since 2003, Chelsea have been owned by Russian billionaire Roman Abramovich.[12] In 2016, they were ranked by Forbes magazine as the seventh most valuable football club in the world, at £1.15 billion ($1.66 billion).[13]
source_ wikipedia 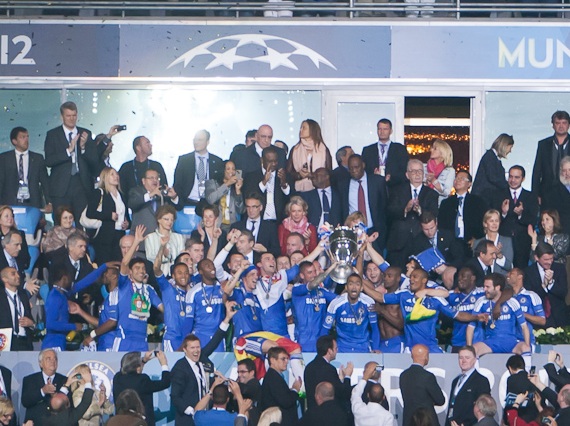